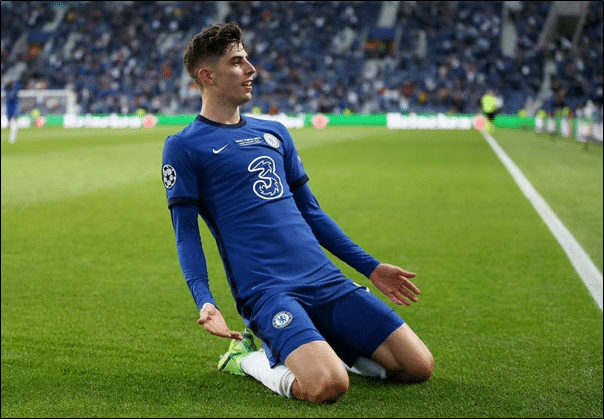 Tayfun Korkut, when asked about Kai Havertz said, “He has played in the Champions League. He was the top player in the Bundesliga. He is ready to play for any team in the world. Improve? What can you improve? Sometimes it is best to leave players like they are.”

Fast forward to his big-money transfer to Chelsea FC, the one touted as a “German Prodigy” did not live up to the hype, external factors such as living in a new country, learning a new culture, language and contracting the corona-virus could have all contributed to this. However, all Chelsea fans would concur that he is worth every penny with his solitary goal of securing the clubs’ second UEFA Champions League title 2020/2021.

According to understat, whose statistics were used in preparing this article:

“Expected goals (xG) is the new revolutionary football metric, which allows you to evaluate team and player performance. In a low-scoring game such as football, final match score does not provide a clear picture of performance, this is why more and more sports analytics turn to the advanced models like xG, which is a statistical measure of the quality of chances created and conceded.”

Let’s analyze Havertz’s 1523 minutes in the Premier League 2020/2021. His 1523 minutes can be further broken into the positions played as seen in the table below:

It can be seen that the major role he played for Chelsea FC in the Premier League was as a Forward, in FPL terms this needs to be taken into consideration as he is again classified as a Midfielder, priced at £8.5m. The advantage is 1 point more per goal and 1 point gained for a clean sheet than a player classified as a Forward.

His returns were 4 goals and 3 assists, his statistics read:

xGBuildup90 – Total xG of every possession the player is involved in without key passes and shots per 90 mins (0.61)

This is represented graphically below:

Kai Havertz’s statistics wouldn’t give a statistician or analyst the “wow factor” when compared to a proven and prolific forward such as Harry Kane, which is depicted below:

Statistics aside, found in 11.5% of FPL Squads, Havertz can have that breakthrough season in 2021/2022 that the Chelsea FC faithful dreamt of in 2020/2021. If Chelsea FC does not sign a new forward it is assumed that Havertz will lead the line as he did in the UEFA Champions League Final. Current FPL ownership classifies Havertz as a differential, his decent end to last season and run in UEFA EUROS 2020 shows that he can be a vital FPL asset, will Kia Havertz be in your squad?