Usually, a quick midweek fixture gives a chance for players/squads who have not performed well to redeem themselves. This was not the case as our captain Kev toiled in the game against WBA with very little to show for it, yet somehow walked away with two bonus points. WBA played very well here there was no doubt, but MCI cannot finish their dinner at the moment, look a little lethargic and some of the positioning of key players looked a bit off from their normal/preferred. The return of Aguero to the front line could be key but with 20 goals less scored than this point in most seasons, perhaps the MCI attack is not to be so heavily favoured.

Another loss for Chelsea, a plucky 10man draw against Saints and a missed opportunity for Spurs this week. Salah – another game, another goal – did his part.
Leeds stole the goal show with the 5 put past Newcastle, though many are wondering what could have been with Wilson. Bruno’s blank was particularly enjoyable for those who had kept faith with Rashford (and to a lesser %) Martial.

With the exception of Salah getting a goal, all of the four names we put forward had a very poor FPL gameweek.

This gameweek is back on Saturday AM so this will be an abridged version of my thoughts. A quick scan of the fixtures show that most of the high owned players have a good fixture in front of them, so it will be likely that I will stay within the premiums that are in my squad, rather than seek out a differential. 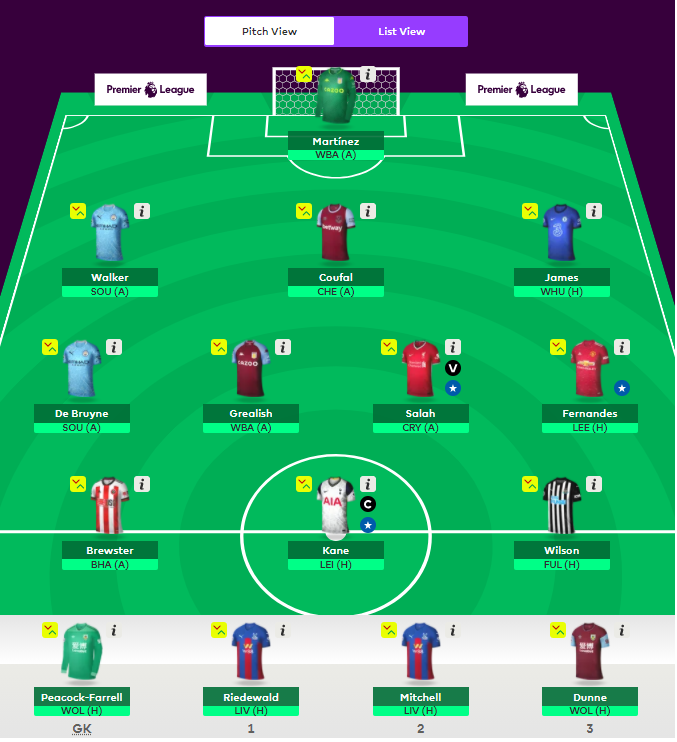 WBA stood up to City very well and certainly earned their point. Kevin was not quite in the right areas of the pitch to affect things, had Jesus been able to hit the target Kevin’s performance may not have been considered a blank. Southampton will be quite a frantic game I think with how Hanssenhuttl appears to be playing his team, This may leave good spaces in behind but in the absence of Aguero I’m not sure chances can be converted atm. Nice to own for now but will hold off the armband for this one.

After the first blank in an away game in what feels like forever, there is almost a case here for Bruno to bounce back here. Leeds ran Newcastle ragged but this may be in detriment to their own fitness with a quick turnaround from Wednesday to Sunday. Man United with a bit more European fixtures under their belt may be a bit more conditioned to this. Always prominent in the attacking play, probably on the first penalty.

How he did not score against Liverpool I will not know. His record against Leicester is pretty strong and for all Leicester’s good points and play this season I do not think we have seen LEI at their best yet, particularly in defence. The number of goals they concede at corners is quite high and I think this will be quite an open game with opportunities to shoot from both sets of players. My © b/c of his record against Lei.

Another game, another goal. Even against a pretty robust team in Spurs, this was a good showing. He has only failed to return on 2 of the games he has played in so far this year. Crystal Palace up next and this tends to be a high scoring affair in favour of Liverpool. Palace don’t have a huge depth of squad so I’m expecting a tired set of defenders here. My only hesitance is that they play on Saturday at 12:30, whilst there is no such thing as a curse, it never usually works out for me, so this is probably the only factor that stops me putting the © on him. Only just.

Feel free to tweet any queries you may have ahead of the off if I’ve not mentioned someone you are considering.