Despite just the 9 fixtures, yet again another entertaining round of football with plenty of goals flying around. Plenty of decisions had to be made by many managers as lineups meant that most were left scraping the barrel of their benches to try and field eleven. Somehow I keep taking hits and failing to address the lack of a bench.

December is when the fixture list piles on and we will have games every two/three days, so some of the upcoming posts will be a bit shorter.

My own team was pretty decimated by players not making matchday squads (Walker/Mitchell), starting from the bench (Bruno/Jota) so to have come away with a score of 55 from 9 is pretty much down to picking the right captain in GW11. KdB did indeed turn up against Fulham and on review of the highlights was unfortunate to not have another goal to his name had he kept his shot down.

GW11’s pick was directed by a combination of the eye test, my gut and the fixture. The 28 points were welcome.

Once again my thoughts have not really been focused enough as I continue to miss out on the Kane/Son points most weeks. Whilst I did own for a period, I dropped off the bandwagon telling myself that the fixtures were poor, as they continue to score/assist their way through almost every fixture the points are definitely hurting my rank climbing at the moment. I’ve struggled this season so far to get the balance in my squad taking far too many consecutive hits trying to play catch up. Bringing in Ziyech for Son and Jesus for Kane whilst trying to get ahead of a curve rather than hold on to in-form players.

Newcastle still have not confirmed whether their fixture may go ahead yet, so one to watch for the Wilson owners amongst you, WBA will no doubt be hoping to take advantage of whatever is left of the squad. We may get a better idea of how Wolves plan to replace Jimenez in the starting 11 here against a more level opposition, the Liverpool game on Sunday was not perhaps a true showing but Podence again got the nod up front there. A Manchester derby is probably the top pick of the fixtures but a derby can be tricky to predict, whilst Man United have not exactly had their finest week there will be an element of pride regarding this fixture. A Blue vs Blue showing with Chelsea heading to Everton in what will be an intriguing matchup for Ancelotti against a former club.

Sunday has the potential to be the higher goalscoring day though with a number of high scoring FPL players facing teams that tend to concede possession/shots. Southampton will now have talismanic striker Ings back in the lineup from the start and will fancy a good result at a lacklustre Sheffield who have yet to get going this year. Crystal Palace seem to relish playing against 10 men but have struggled to impress in defence. Spurs will have to take the game to Palace as it’s unlikely they will venture much out of their own half in this game unless it’s a counter or corner. Liverpool take on Fulham in what will likely be a popular fixture to target attacking returns, Parkers men have improved away from home but have yet to show their resilience translate at home whilst Liverpool rested many in the midweek having obtained. Arsenal are in a bit of a rut, they are another team yet to find their feet this season, Burnely could well get a shock result here but on the face of it, this could be a low scoring affair. Finally, Leicester vs Brighton could go either way, Brighton for all their positives have yet to look like keeping a clean sheet and Leicester whilst sitting high in 4th position in the PL have yet to find their feet at their home ground, winning just two and losing three. 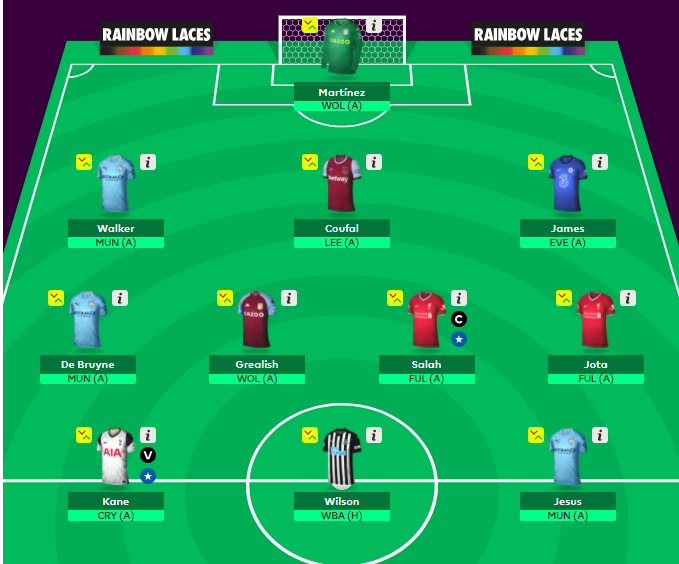 Currently just behind the initial target of 600 armband points, but another haul or two and we are back on track.

Looked sharp when playing midweek when most of us were expecting a benching in the European game midweek, lasting playing the full game. However the positives were there to see, another game, another goal. Salah will be keen to make his way back up the goalscoring charts and make up for lost time. With the volume of fixtures and the attacking personal Liverpool have we may not see him play the full 90 if the game is won and Spurs on the horizon.
Fulham have looked better recently, but more so away from home. They’ve not shown that they are completely effective at shutting attacks down without conceding dangerous free kicks or other opportunities. I’d expect them not to match Liverpool here and Liverpool to have a good two-goal margin. Mane was rested so if you own, then he may be the one to stick the band on if you own instead. This is probably the last possible chance to use a big name player against Fulham until GW16.

Big-game derbies are usually settled by big-game players, he ran the show in his previous two PL outings and I expect much the same here at United. With Jesus seemingly unable to hit the target it will be down to Kevin and Raheem to settle the derby. I expect United to be up for this, but I think the momentum City now have will edge this for them. Ole to pick an underpowered starting eleven as he tries to wrestle back some managerial credibility.

With Villa having an extended break thanks to the Newcastle game being called off, it will be intriguing to see if this will have harmed the good attacking momentum Grealish had picked up. Wolves may be a tricky team to break down but without the Mr Postman up top, Villa will be looking to capitalise. Grealish should really be taking penalties after the Watkins miss but there is no guarantee on that. Huge ownership levels.

Spurs were clinical against Arsenal making them look rather ordinary in truth. Palace last week had an emphatic result against the 10 men of WBA but when it was 11 vs 11 they looked as though it could go either way and that the defence was ropey at best. Fully expecting another Spurs win here, Kane’s personal record of scoring against London clubs is strong and I did not take that into account last week. Whilst the number of shots he is taking has dropped, I think this was more a result of who they were playing and the tactics deployed by Jose. I expect him to start racking those numbers up. Kane has the higher goal involvement over Son (58%) which is why I’ve made that move.

I’m quite happy with how my squad looks but I’m nervous about not owning one man after transferring him out.

Someone had to make way in order to fit Salah in and Bruno was my only real option. I’m not expecting a United win personally, despite winning both fixtures in the PL last year. If they do score, Bruno will be at the heart of it if they do and no doubt I’ll be trying to fit him back in as soon as the following gameweek starts back up.