A quick turnaround on the back of a decent week (70pts, 26 from DCL) despite only actually fielding 10. The feeling of good points banked is always a welcome thing but with so much European action midweek there may be yet more injury and covid conundrums before the Friday night kick-off. So it’s likely we may not get a clear picture in good time.

A quick recap of last week – we felt that Everton were due to go back to winning ways and so far Fulham seems as good a place as any to go get a victory and some goals to get your season back on track. DCL’s goals were well taken and with Richarlison and James back in the squad the type of play was much more conducive to scoring goals…if not keeping clean sheets. Bruno had quite an interesting w/e around these parts, to my eyes he is still the one United asset for points worth having. He was certainly the most important player on the park and for some better finishing or a bit more luck from the forwards, he may have taken home a few more points. For once my “Fear” section was remarkably quiet with none of the picks there with anything close to a return. I for one am okay with that.

Again, a full set of European fixtures means there will be some weary legs on these squads for the weekend. Whilst a few of the top teams are beginning to settle back into the condition that enables them to play in top gear every 3 or 4 days, most are struggling to yet find that rhythm.

Perhaps Burnley are in for the long-awaited result over Man City that has eluded them over the years? This is City’s first game of their supposed fixture swing but they’ve not really found the net as often as we are used to seeing over the past few seasons. West Brom and Sheffield Utd square off in what must feel like a must-win with both needing some points. Man Utd have what should be a good opportunity to attack a backline rather than see a team sit deep all game.

Chelsea vs Spurs will no doubt be the pick of the TV fixtures but I’m not sure I can handle Sky’s overuse of Master vs Apprentice build up all weekend.

GW9s Monday night football was a pretty drab affair, just the two goals but given the fixtures on offer on Monday in GW10, perhaps there is some hope. 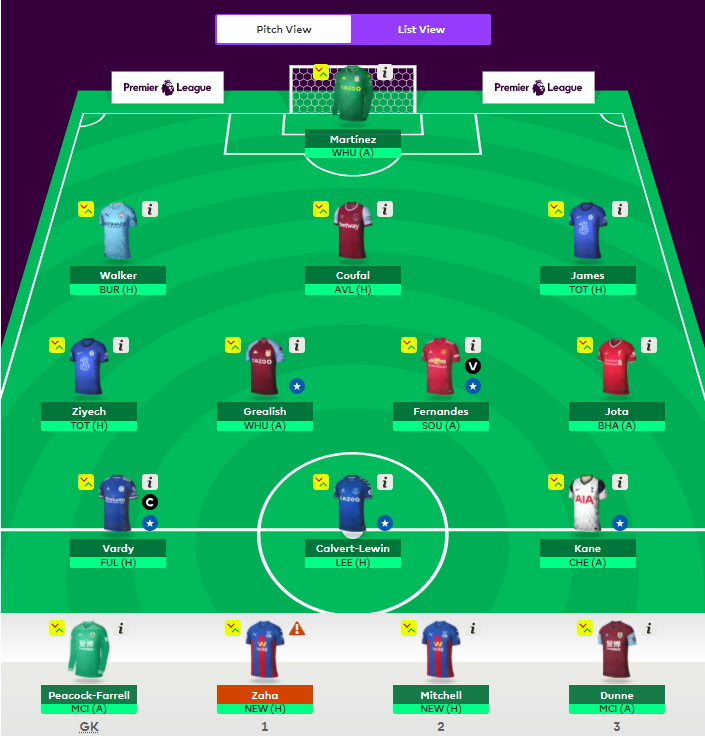 Still the only United option I would consider owning, hard to say with any degree of certainty if he will keep penalty duties (Rashford took the penalty this week in Europe) but he is certainly at the heart of everything good that is Manchester United. He’s probably my most in-form player in recent weeks and apparently boasts some form of away day voodoo having never blanked outside of OT. Towards the end of the game on Monday, Southampton failed to set-up shop and the high line allowed them to be caught out by the Wolves players miles from their box. Expecting that there are a few goals late in this game.

The return of his mates has boosted his fortunes in the box, a good outing at Fulham with Leeds next. If Ancelotti is serious about Everton making moves up the table this fixture needs to be won. Bielsa will fancy himself to go toe to toe as a tactician so this will be a fascinating game. The wing-back system they have will play to some of DCL’s strengths, but it was really Richarlison, James and Digne who really impressed at the weekend with DCL being the main beneficiary of it. I think Everton will need to aim for a couple of goals at least to win here as Leeds will be a much sterner test than Fulham who found the net twice (despite missing the penalty). Still, relatively good value coupled with his ultra-high ownership.

Targeting Fulham = Points + Goals. Currently, the most transferred in forward too.

Leicester really didn’t show much in the way of life against Liverpool, however, after a stern talking to about their character by the gaffer I’m sure they will set about to win against a Fulham side who continue to allow a plethora of shots every week. Whilst it is clear Fulham will try to win the game, they just don’t seem sturdy enough to keep teams out of the shooting gallery. Vardy and his teammates will be looking to make amends and get back to winning ways and whilst they do have a european game on Thursday, there’s only one man to trust with the armband in the Leicester camp.

I don’t have any City attacking players and it is making me so very nervous. Burnley last took a point from City in 2018, since that point Burnley have lost each of the next four meetings scoring one goal and conceding 15. Yes, City haven’t hit the attacking levels we are used to in past seasons but it will not be long before we see them hit the heights. Depending on how the CL game goes on Wednesday night, I may make a late move for one of these players. It will probably be too soon for Aguero who is yet to really put down any minutes this year.
A high scoring game is likely, but which City player? Your guess is as good as mine.

After one game out, the transfers are still flying out for Salah this week at a rate of 3 to 1. It’s probably partly due to COVID and maybe people want the funds to spend by having Jota + 6m, which I can understand. However, I’m very nervous about not owning him or Mane (who was really unlucky at Leicester not to come away with a goal). Brighton are no pushovers but they just can’t seem to keep a clean sheet against the top 6. Salah will be keen to fire in a few goals at the weekend and Brighton don’t seem to ever set themselves up well enough to stop conceding shots against teams like Liverpool.