This is part 2 of FPL Psychology, read part one here: FPL Conformity

Let’s start off by continuing to talk about conformity in FPL. How likely you are to conform to decisions that are popular in the FPL community (merely because of the popularity) is impacted by whether you are psychologically a maximizer or a satisficer. In the context of FPL, a maximizer is someone who goes to exhaustive lengths to seek the best decision. A satisficer is someone who finds a good option, and once they determine that decision will improve their team, they go with it. Of course, most people aren’t extremely one or the other. However, if you’re an avid FPLer, you’re probably more of a maximizer. In the world of FPL, there are plenty of ways to improve your team from one week to the next, but the tough part is making the decision that maximizes your points. You can probably think of a time where you rushed a decision or didn’t quite have the time to do the typical amount of research, and made a satisficer-like decision about your FPL team. Maybe you got lucky and it worked out, but I would argue that you hurt your chances of optimizing points.

It’s important to, as you see posts about FPL on twitter about good players to put in your team, try to come up with better alternative decisions, even if the decision being promoted by the post could benefit your team. This kind of active engagement will help ensure that if you do make a decision that is heavily supported by the FPL community, you’re doing it because you think it is the best decision, not just because some people said so, and you’re satisfied with the marginal improvement.

Many of us FPL managers find that it is easier to select players that have done well for us in past gameweeks or seasons. We might like the idea of being loyal to certain players, but if a player consistently does well for us, we are also being conditioned into getting him in the future through operant conditioning. Being conditioned in a way that impacts decision making in FPL can be a problem, as it can create a deeply set, unshakable bias towards picking certain players. Keep in mind that one good way to make decisions that minimizes the impacts of bias is to merely look at statistics (and look at the same stats for each player). Algorithms are useful in this way as they are not concerned with our feelings towards players.

What is Operant Conditioning?

As B.F. Skinner explained in 1938, operant conditioning is a method of learning that occurs through rewards and punishments for behavior. Through operant conditioning, an individual makes an association between a particular behavior and a consequence. The photo below (from oer2go.org) should give an adequate explanation of how punishments and reinforcements impact behavior. 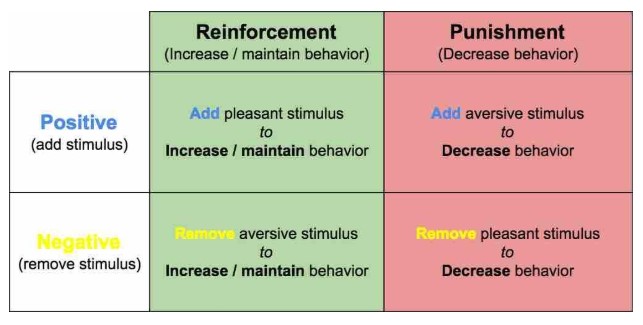 In FPL, the pleasant stimulus would be a lot of points and the aversive stimulus would be very few points. These stimuli get associated with the players we own, which make us more likely to choose or avoid players based on how they perform while in our FPL teams. To further clarify the table in FPL terms:  positive reinforcement is transferring in a player who does well (more likely to make the same transfer or selection in the future),  negative reinforcement is transferring out a player who does poorly (more likely to make similar transfers out in the future), positive punishment is transferring in a player who then does poorly (less likely to get him/ make similar transfers in the future), and negative punishment is transferring a player out who does well (more likely to wait it out in the future). These types of punishment and reinforcement can also be applied to many other aspects of FPL (if not all) including captaincy choices, taking hits, doubling up on a certain team, or executing a certain strategy. Hopefully in most cases, operant conditioning improves your future FPL decisions. For example, every time beginner-level FPL managers take unreasonable point hits and captain their goalkeeper, they will likely do worse because of it, and associate these sorts of actions with a bad stimulus (low points). In this way operant conditioning is foundational to how we learn from experience.

Operant conditioning doesn’t always lead to ideal learning and realization. Let’s say you have a 5.5-million-pound midfielder who gets you 5 points every gameweek for a whole season. After being conditioned to associate owning this player with getting good-value points, you will be more likely to choose him next season than you would if you never owned him, or only owned him for ten gameweeks of the season (even though the player would’ve performed exactly the same). As a result of owning one player instead of the other, you may end up relatively overvaluing the player you owned because you paid more attention and got rewarded by his success.

A good counter to the operant conditioning that happens over the course of an FPL season is simply researching a lot. You may become biased towards certain players and not properly research them at the start of a new season, but still put them in the team. Make sure to look into why you’re actually selecting the players you are and there should be sufficient statistics (whichever ones you like) to support your decisions. It’s a simple solution, but there is no real replacement for researching every player. Another decent way to be able to not be quite so impacted by operant conditioning is to be aware of players that have rewarded you with points previously and to be aware of the operant conditioning process.

To conclude this article, I’d like to mention a psychological heuristic that, when encountered in the right circumstances, is very tough to not be impacted by. A person can “anchor” themselves to the first piece of information they gather about a topic that significantly impacts their judgement. The Wikipedia page for anchoring (https://en.wikipedia.org/wiki/Anchoring) has a good example of a study demonstrating how impactful it can be. In this study, both groups of test subjects were given clearly ridiculous anchors. One group of people was asked whether Mahatma Gandhi died before or after age 9 (their anchor is nine). The other group was asked whether Mahatma Ganhi died before or after age 140. “When the two groups were asked to suggest when they thought he had died, they guessed significantly differently (average age of 50 vs. average age of 67)”. These kinds of studies can be replicated to show anchoring’s impact on decision making. In FPL, this heuristic can be applied to those Twitter posts you saw about what player prices should be (and perhaps a few other things). Luckily, people with high expertise and experience in a field aren’t as susceptible to anchoring’s impact. For us hardcore FPLers, anchoring is surely most impactful when discussing certain players that we aren’t experts on. Players on newly promoted teams, recent transfers, or maybe even just mediocre teams are examples of players we might not know the most about, so beware of the impact that the first piece of information about them can have on your decision making.

In conclusion, try to be aware of these potential psychological traps as we head into the FPL season so you don’t fall into them. Also, the more expertise you have, the more resistant you are. Just be an expert on everything FPL and you should be fine. ?